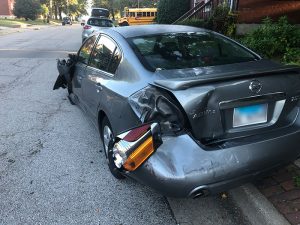 Once upon a time a resident of our home town, Belleville, Illinois had his car crashed into while it sat in front of his house. Mind you, he did nothing wrong, his car was parked safely (he thought) where he had always parked it. He was falling asleep believing all was well in the world, until he was awakened by a loud crash around midnight.

The man and his wife sprang down the stairs and threw open their front door to find their family automobile utterly destroyed. The minivan that had crashed into it was also disabled, and the driver was pretty shaken up. The husband determined that no one was hurt and then, surveying the damage, he asked the man behind the wheel of the minivan if he had insurance. He did!

The owner of the destroyed car believed his problems were solved. Police arrived on the scene and they towed the minivan and asked him if he wanted his car towed as well. The crumbled car was still sitting where he had parked it and he figured that he would have it towed in the morning by a St Clair Towing Company.

He assumed that the insurance adjuster would probably want to take a look at it the next day and that the process of receiving an insurance settlement would proceed quickly. He was wrong.

A 24 Hour Tow Can Jump Start Your Insurance Payout

The man informed the policeman and tow truck driver that he would wait to have his car towed until after speaking to the insurance adjuster. Sure, it was more than a simple flat tire, it was an eyesore in front of his house, but he was sure it would only be for a day or two.

Wouldn’t you know it, the insurance company didn’t seem to be in any hurry to get the ball rolling, and his twisted piece of metal was becoming a neighborhood eyesore as it sat there 24 hours a day for several days.

Then a concerned neighbor pointed out what he should have realized on his own. Insurance companies tend to move faster when they know that the cars they will ultimately be responsible for covering are sitting in an impound lot racking up cost. His neighbor suggested that he call the wrecker service and have the car removed.

He asked his friend: “Do you know a good 24 hour tow truck near me?” and his friend suggested calling Paule Tow Truck Service, in Belleville, Illinois.

Cheap Towing and Roadside Assistance Leads to a Happy Ending

Within minutes of his call, Paule Towing Service was there, loading up the neighborhood eyesore and sweeping up the mess. The car was headed to Paule’s secure lot and when he informed the insurance company that he had called a tow truck company to haul it away he was amazed at how quickly they assessed the damage and agreed to a fair amount for compensation.

It was almost as if Paule Towing was able to speed up time and bring this story to a happy conclusion!